On the day of my daughter Lucy’s dance recital, my whole family was a wreck. Lucy woke up at 4 am and graciously woke up the rest of the household with her. Her anxiety had reached peak levels, and she bounced into our bedroom at full speed, shaking us awake with her high energy.

I tried everything I could think of to calm her and help her back sleep, but nothing was working. By 9 am, I was begging her to nap. I knew we were in trouble. I could foresee the day ahead: there’d be lots of tantrums. Every little unfulfilled request would end in tears. The dance recital was going to be a disaster.

Lucy is the kind of child who loves dancing, but she finds her weekly class “boring.”  She is consistently inconsistent in the way she treats practicing routines, and she struggles with focus. My husband and I tried an experiment this year; we kept Lucy in a class with younger children instead of moving her up a level with the rest of her classmates. The next level up was attended by mostly eight-year-olds, and I knew a six-year-old with ADHD couldn’t pretend to be eight. We wanted to see if this decision would create a more even playing field. So far, it had seemed to work.

But now, it was recital day—the big test of this experiment. Usually, Lucy loved recital day. She would come alive, ignited by the anticipation of having an audience. However, this morning, an unmistakable sense of doom permeated the house. Would Lucy have the confidence she needed to perform? Or would she cave in to her anxiety?

I continued to try to create peace for her as the day progressed. We snuggled and listened to a book on tape, ate her favorite healthy snacks, and talked about what she loved about dancing. She seemed to be doing better, but as we were preparing to leave for the performance, Lucy became absolutely frantic.

Then, I remembered a simple tool that I use with some of my ADHD clients. I retrieved a laminated copy of the simple PAUSE button pictured below, a concept developed by my good friend and colleague, David Giwerc (Founder of the ADD Coach Academy). 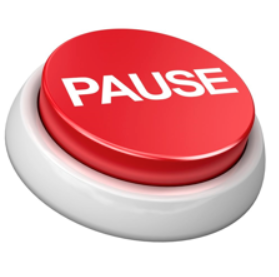 I handed the PAUSE button to Lucy. I explained how she needed to pause, calm her breathing, and re-connect to her prefrontal cortex, the part of her brain that regulates behavior and utilizes logical thought analyses to help her make good decisions. I told her that if she felt like she was forgetting her steps, she could hit that pause button, and she would be able to calm down and remember her routine. We practiced pausing and breathing several times before we left.

After finding my seat in the audience, I prayed. Like every parent, I wanted my child to do her best, show off her hard work, and be happy with herself. I didn’t want her to be embarrassed in front of her other classmates, the ones who had moved on to the next level. Right before she went on stage, I saw her in the wings. There she stood in her tutu, her cheeks rosy with makeup. She closed her eyes and breathed. She paused. And then she came out and danced her little heart out. She nailed the routine, down to the last plié!

The PAUSE button has worked for many ADHD children, including Lucy. It is such a powerful tool that I couldn’t help sharing it with you on my blog today. PAUSE encourages children to STOP irregular behavior and access the prefrontal cortex, allowing them to utilize their logical thought processes before acting. The power of the PAUSE is that it connects children with their prefrontal cortex and allows them to rationally observe highly charged emotional situations. By pausing, children can accomplish the following tasks:

If you plan on using PAUSE with your child, I’d suggest creating a visual cue or code word. The PAUSE button symbol seems to be very popular with kids, and I often print them out and laminate them for younger children, who like the physicality of “pushing” the PAUSE button. Older kids may prefer a code word or phrase, such as “Please take a moment to pause.” PAUSE allowed my daughter to process what was going on, analyze her emotions, and pinpoint her best response options before jumping on stage. Like Lucy, I know your children could benefit from PAUSE!

Get your FREE handout, Calming Intrusive Thoughts when you sign up for my newsletter!